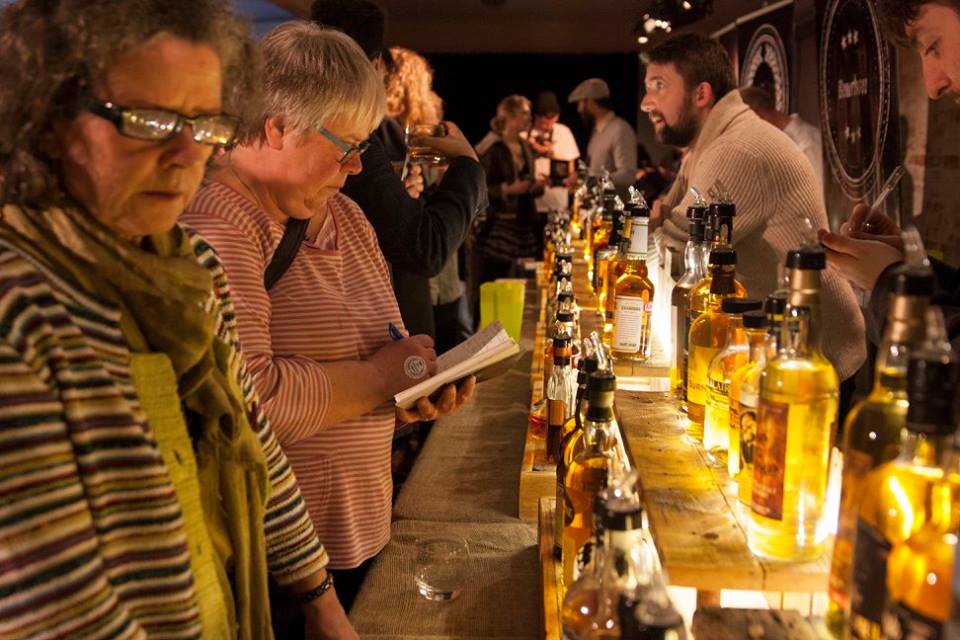 So, the affair was taken to Brighton in hopes of finding more than just a few flings.  What did we stumble across?  An abundance of like-minded people that we can visit again in the future, whilst we forged some relationships with new partners that will be continuing throughout the year at our next events.

The venue was filled with crepuscular patrons darting between the four bars, keen to taste a huge variety of whisk(e)ys.  The bourbons were a particular hotspot during the evening and a dalliance or two was had with the cocktail bar en route to the photo booth.

New to the Whiskey Affair was a stand by Matt and Steve who comprise Shine London.  Discover more about them on their website – they’re bringing American moonshine over to the UK to introduce it to our market and ensure that the ethos and fun of the drink is discovered by people who want to share their spirit (the favourite pun of the staff this festival.)   It was a fantastic hit with the attendees and these guys are the perfect embodiment of the product – make sure you come and chat to them at our next event!

Paul John Whisky had a stall staffed by the knowledgeable Shilton, giving away some samples and talking people through the brand’s history and range. As a noted feature of some of the feedback we received on the night and subsequently as someone people loved speaking to, we’re grateful to have him on board with us.  Indian whisky is a relatively new market that is ripe for exploration – so what better way to learn than through the experts introducing it to us?

So what stood out for Brighton?  Which brands rose to the top of the pile for the discerning palettes of the seaside amour?

SCOTCH  Brighton had a very highbrow taste-bud on Saturday: Balblair 83 being the most popular Scotch of the night.  In conversation with fans, it was noted that the price tag of the bottle was oppressive for a casual http://premier-pharmacy.com/product-category/mans-health// whisky http://www.buyambienmed.com drinker, yet the opportunity to taste it at the event for a reasonable price meant that the chance was too good to miss.  Mike, our barman on the Scotch table was also a fan of the drink it would seem:

BOURBON  The Noah’s Mill bourbon was more than just a flirtation for the Brighton crowd, being the top bourbon drunk at the bars and also taken home the most from the off-licence.  A smooth taste that defies the subtle packaging, the quality of the brand stood out head and shoulders above the rest on the night.

WHISKEY  Would it surprise you that a Japanese whisky was voted the best in show?  Hakusku was a firm favourite consistently and with Japanese whisky being difficult to source currently, the abundance at the event was a clear welcome feature to fans of the brands.

COCKTAILS  We had another busy night of cocktails with Sam, primarily concentrating on the unusual: Japanese Breakfast and Starters keeping us refreshed all evening.  Keep your eyes peeled over the next few weeks for some more of our recipes being released so that you can try some of the cocktails at home; one of the highlights of our event nights is discovering all the delicious new flavours whisky can combine with.

The photobooth featured a constant stream of willing participants and miscreants, always creating a fun-filled addition to our events!  Combined with the photography prowess of the bombshell that is Hana Laurie, we have an album of stunning memories to treasure from our first visit to Brighton.  Check the photos out to see if you can spot yourself!

Thank you Brighton – we’ll be back at the end of the year.  Our next event is at Conway Hall in London on 23rd April.  Tickets will be released tomorrow, and we hope that you’ll want to come and party with us because we already have a packed night planned!

Links to our wonderful collaborators from Brighton: