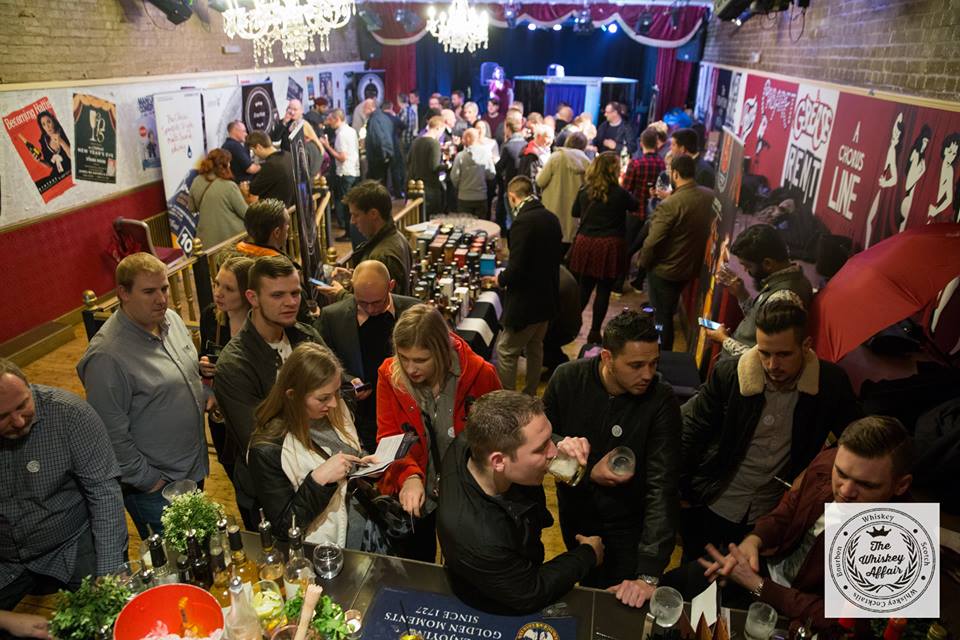 Well, the weather outside was frightful – but thankfully, Southampton was delightful (and we think Sinatra would agree.)  We’re a week late with this update, yes – apologies for the delay but the matter of a small hand operation rendered typing a mere pipedream last week.  This week though, we’re back in action and as well as reflecting on what happened in Southampton, are busy booking venues for 2017- keep your eyes peeled for more info over the next few weeks!

We held the Southampton event in a beautiful little theatre space at The Stage Door.  The décor was fabulous and the staff fantastic- we couldn’t have asked for more accommodating hosts and would heartily recommend finding out more about their shows and events if you enjoyed visiting us there as they have a calendar bursting with things to enjoy.

Our masterclass this time was provided by Ben Hammond from Maxxium UK Ltd.  He gave a talk on some key features of the Jim Beam brand, focusing on the new and exciting release: Double Oak.  We received great reviews of the talk following the event, so are sure to invite him back to talk to guests in the future again!

Shilton of Paul John Whiskey returned and outdid himself in our photobooth- making his beard the star attraction in our staff photo to end the night, causing many a giggle throughout the remainder of the images.  We’re getting used to Paul John flying out at our Off-Licence too now as he is turning people towards the Indian whisky and gaining new fans for the drinks left, right and centre.

A new addition to the festival was Blair, representing Benromach at the event.  Talking patrons through the range, we quickly saw queues forming at his stand and a huge interest in the Benromach 15 in particular at our off-licence, it fast becoming the most popular bottle to leave the venue.

Our singer celebrated her birthday the next day, so Southampton was a mini staff-party for her, accompanied by a birthday cake in between sessions so that we could all indulge in her honour.  Taking requests for her set and dedicating some songs to her favourites amongst the crowd and staff, she immediately picked up a young fan who was as captivated with her singing as we are!

Prints http://premier-pharmacy.com/product-category/alcoholism/ Charming was busy both sessions, and housed nine people at once during a raucous ‘elephants in mini’ experiment before the end of the afternoon session.  Are you in the photos?  Check them out here:  Prints Charming photos.

We were delighted to welcome back the Moonshine boys too, repping Shine London and encouraging everyone to try their American delights.  There were tons of brightly coloured liquids being drunk around the venue, meaning that their cocktails were definitely doing the rounds!

What was the most popular then?  What made Southampton keep going back to the bar for more?

SCOTCH The Dream Dram was on the Scotch bar (we know it’s English, yes) and it flew out- almost selling out in session one.  It was a special port cask release, barrel #0859 and people couldn’t stop raving about it, one lucky punter taking the stunningly crafted box home with him as a memento.  Other popular drams were Dalmore 15, Glenfarclas 21 and Glengoyne 21.  Southampton liked their older whiskys!

BOURBON  A new entry into the world of top sellers from the Southampton drinks: Four Roses Small Batch being a very popular tipple for the night.  Do we really need to ask what topped the charts though?  Of course not: Willet’s Pot was as popular as ever, selling well at the Off Licence too just to confirm it’s position as Top Dog.

WHISKEY The Dutch Discovery Road topped the choices for Southampton, and the obligatory Japanese feature was Togouchi again.  This time though, the ‘locals’ pulled back some votes with Penderyn and Teeling both proving extremely popular with tasters and staff alike!

COCKTAILS Southampton possibly needed waking up if the sales of the Indian Espresso Martini were anything to go by- or maybe it was a nod to Shilton and another excuse to taste the fruits of the Indian whisky market.  Whatever the reason, the venue smelled delicious throughout the day as more coffee was made up time after time to fulfil orders!

We actively get social with attendees and invited them to share their experience of the night with us. We’re delighted that we did because the photos and posts coming in were fantastic! Prizes of free tickets are to be chosen at the end of this week, so if you have some to share then do so via Twitter, Instagram or Facebook using #whiskeyaffair and we’ll find it and choose our favourites. Thank you for all the participation so far, we’ve loved seeing the night from your side.

All the photos from the night done by the excellent Hana Laurie are here: Whiskey Affair, Southampton Gallery

2017 is gearing up to be an exciting year with ten events in the pipeline- stay tuned and come and join us!