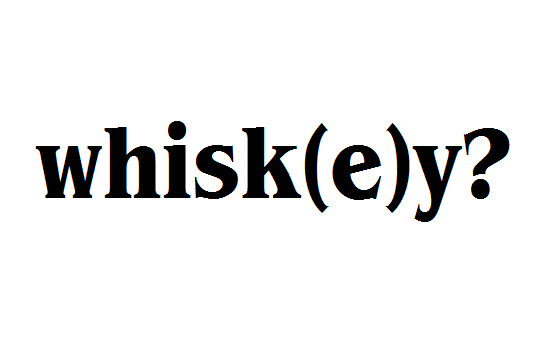 That little vowel denotes a huge difference in not only origination but distilling processes in creating our favourite umbrella of drinks. We are asked frequently about our choice of spelling for the events, so we thought we’d look at the etymology behind the discrepancy.

Firstly, whisky is the traditional name given to products originating from Scotland. The Canadians, Indians and Japanese producers favour the spelling “whisky” because they are emulating the Scottish method of production too. So, where is an ‘e’ applicable? If the whiskey is made in America and Ireland, chances are that it will have an ‘e’ in the spelling to maintain convention.

It can’t be just a spelling that sets them apart though, surely? No, there are some other distinctive features that vary between the methods too. Scottish and American drinks are generally distilled twice, whereas Irish whiskey is distilled three times – making the product slightly smoother and lighter. Irish and American whiskey traditionally use pot stills to distil the spirit whereas whisky is produced in a variety of shapes and sizes. In Scotland, the barley is dried with peat, whereas whiskey uses wood and various fuels which impacts on the flavour.

The core of any drink made must be in the raw ingredients http://healthsavy.com/product/levitra/ though. The Scottish use malted barley in most whisky that is produced, however this has not been the case in Ireland. As well as malted barley, they also mix other grains in with it. This grain whiskey lends itself to blending and historically it has been used to make cheaper blends. In America, the new settlers were forced to use different raw materials to produce their whiskey due to the different climate and soil conditions. There wasn’t always just one grain available too, and so mixes started being introduced to the blending process. Over time, these different recipes of grain mixtures have evolved so that now, American whiskey bears very little similarity to Scottish or Irish whiskies.

So…that’s all encompassed within that little vowel, and now you know more about it, you’ll understand why aficionados are so keen on the distinction. Why do we spell it with an ‘e’? Simply because we have so many worldwide whiskeys in our midst that following debate, we decided to be inclusive rather than exclusive. We have a whole bar dedicated to just scotch too, so there is definitely enough Scottish whisky to keep every fan satisfied.

Whatever you are drinking, raise a glass to a spirit laced with history and evolution!